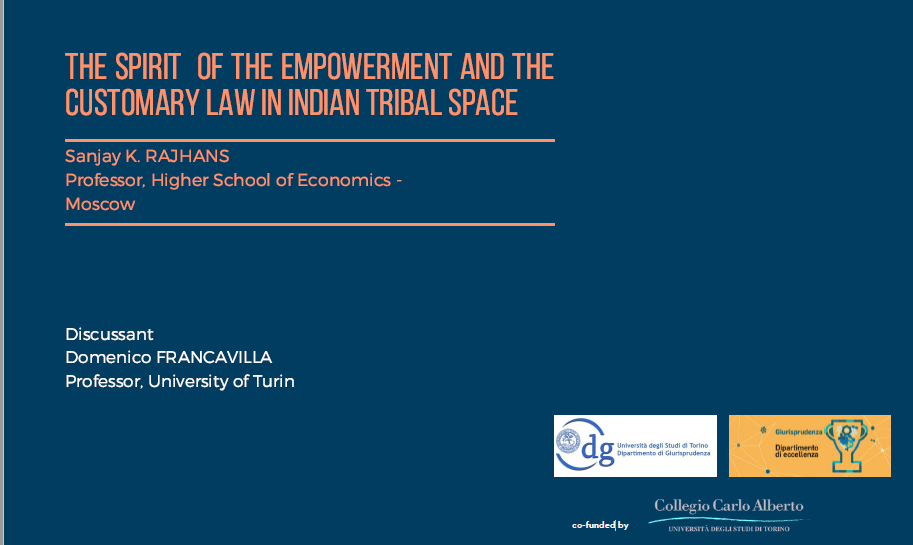 As a visiting professor, Prof. Rajhans taught part of the course in Law and Society in Asia offered in the master program in Area and Global Studies for International Cooperation As a visiting scientist at the Department of Law, prof. Rajhans held an online lecture on “The spirit of the empowerment and the customary law in Indian Tribal space” (22 April 2020), within the cycle “LOT-Law Open Talks”. Prof. Rajhans also held two online seminars for Ph.D students within the doctoral program in Law, the Individual and the Market - University of Turin. The first seminar was on “Legal pluralism and customary law” (27 April 2020) and was held jointly with Prof. Domenico Francavilla (Department of Law, University of Torino), while the second one was on “The proposed constitutional amendment of Russian Federation - Is it a path dependency of the  regime?” (29 April 2020).

In the LOT lecture and in the first Ph.D seminar, prof. Rajhans developed a broader discourse on the Indian legal Adivasi space, underlining the complex interplay between customary law and statutory law. In the lecture, overcoming the dichotomic view of customary law as an as physic, frozen-in-time legal source as against statutory law, the speaker proposed a new analytical framework for customary law, seen as flexible and open. In line with some very recent doctrine (especially, de Sousa Santos, Diala and Hoekema) the high degree of flexibility that characterizes the so-called living customary law is also determined by interactions with state law which are more intense than expected, challenging the stereotype of an insulated customary sphere. In the middle of this complex interplay lie the rights of women: in the first workshop, the point of departure for this gendered analysis were women’s rights to land in Jharkhand, as exemplified by the customary land’s rights among the Santhal community.

The speaker underlined how women have to navigate between the customary and the statutory sphere (and how these spheres influence each other in several ways) in order to successfully claim their rights. It is in fact most common that women suffer from a disadvantaged legal position within traditional social structures and this marginalized legal situation is upheld and perpetuated by statutory law (i.e. the SanthalPargana Tenancy Act, SPTA).
Indeed, the SPTA does not provide any room for women to inherit land on the excuse that “Santhal tribal law is quite definite in not allowing women to inherit”. However, it was underlined that the situation is changing thanks to the flexibility of customary law and the continuous processes of hybridization between the two spheres taking place at the village level. The negotiation of women’s rights within local assemblies is happening more often “in the shadow of the law” which guarantees fairer and more women-friendly decisions.The Ph.D seminar was focused on North-Eastern Naga tribes, building upon their concept of land, and was introduced by prof. Domenico Francavilla, who provided a theoretical framework on legal pluralism and customary law.
After introducing the traditional village administration system among these tribes, prof. Rajhans outlined their complex social and legal category of “land”. Land determines power structures among the villagers and is endowed with a sacred nature which makes it more than a mere object or commodity: it is in fact the land which owns the community.The intricate land tenure patterns among the Nagas are some of the factors which determine gender differences. It is indeed possible to break the network of village relationships down along gender roles which are in turn brought about by patterns of inheritance, resource distribution and governance. Ownership of land and titles over ancestral property are notably a male prerogative and women could at best enjoy a right of use over land, not being able to claim proprietary rights. Moreover, this right of use gets automatically forfeited over marriage, making this right one of a transient nature.

Nonetheless, despite being disempowered and marginalized by customary norms, the legal situation of women is undergoing a change thanks to the abovementioned processes of hybridization of traditional structures of justice administration with statutory norms and state legal values. This process started out during the colonization period, when the British administrators created local tribal courts staffed by reputed people from within the community and appointed village elders as heads and representatives in charge of mediating with British authorities. The ongoing replacement of old village hierarchies with younger elites of bureaucrats and politicians is a crucial factor as well as it means injecting new cultural and legal values within the village governmental and judicial processes.